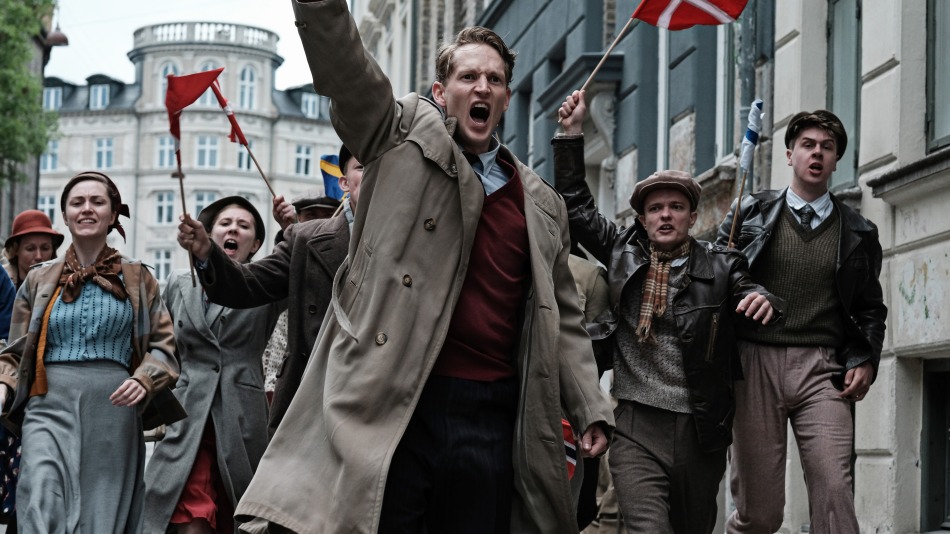 Based on actual events during WW2, Into the Darkness is set in Denmark and portrays their position during those difficult times. Denmark was invaded by Nazi Germany in 1940 and stationed many troops throughout the country. Many businesses were forced to work alongside the Nazi’s or face losing their business and their livelihoods. This film follows the Skov family. A rich family that owns a manufacturing company that produces materials that are shipped and bought across multiple markets. As Nazi Germany invade, they face a terrible decision to either forfeit their fortunes and business or trade exclusively with the enemy and face backlash now and in the future from allied countries. The Skov family quickly becomes embroiled in a series of events that quickly divide a close knit family to a family on edge as they decide who to pledge their allegiance to. Their own country Denmark or side with Nazi Germany.

Written and directed by Anders Refn, Into the Darkness provides us with a great WW2 movie to add to the ever growing collection of films based on war. Typically, we are used to the American or British side to the war, but this different perspective to the war is a breath of fresh air. Our knowledge of the Danish involvement in WW2 was lacking. So to have this film introduced to us has been important. It’s fascinating to learn about the growing resistance during the invasion of Denmark and the amount of Danish men who volunteered to fight alongside the Nazi’s in Europe and beyond. The film deals with a multitude of different stories. The resistance, a family broken apart, loyalties and the potential loss of your business. All of these key elements are covered in the 2hr 32 minute runtime. For a film that is so long, it does well to keep you on track and entertained during its runtime.

Into the Darkness benefits from a very strong lead in Jesper Christensen. The Danish actor, who you may know from the Daniel Craig 007 movies as Mr.White. The Dane, who worked mostly on stage until his mid twenties then went onto the big screen and has had a successful career since. His turn as Karl Skov, the father of the family is one that adds the most quality to the film. All the characters in the film have a part to play, but the character of Karl is the most intriguing. One that evolves and changes throughout the film and one you really sympathise with. A strong business leader deals with a quickly divided family and whether he should work for the Nazi’s to ensure his families financial future or go down graciously and be remembered for resisting the Nazi lure. His performance is one of my favourites of this year so far. One that, unfortunately won’t be recognised at any big award events, but one that should go down as one of his best.

It’s taken its time to slowly make its way across Europe for its release. Released initially in Denmark just over a year ago, Into the Darkness is due to have its UK release digitally on the 5th March via Vertigo Releasing. If you’re looking for something a little different, then this film is the one, especially if you are a fan of war based films.

Check out more from the team below!