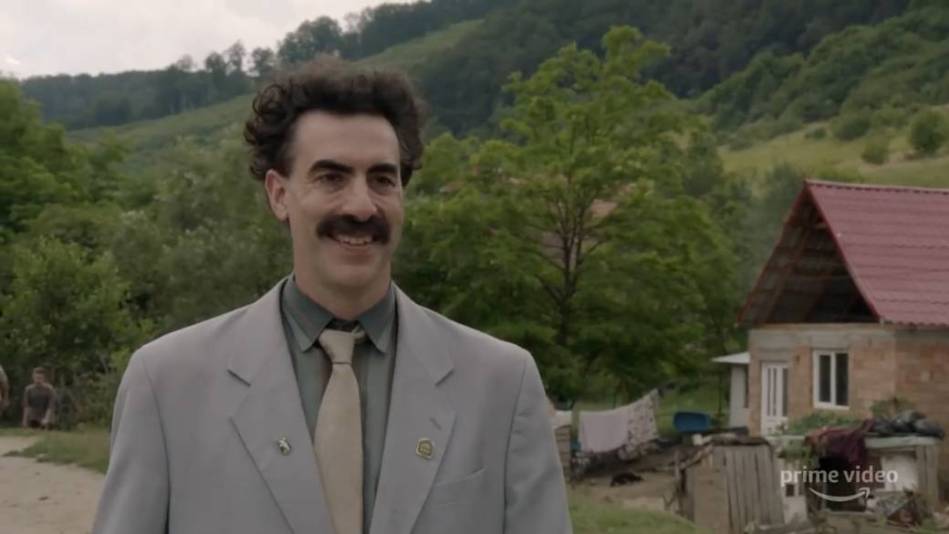 Just when you thought 2020 couldn’t get crazier. A worldwide pandemic and what seems to be hell on earth, the last thing we all expected to come out of this year was a sequel to the 2006 mockumentary ‘Borat’. After images and videos starting circulating around social media of Sacha Baron Cohen dressed up as Borat in America earlier this year, it was quickly announced that they had filmed and screened the sequel to Borat to hopeful distributors. Amazon were quick to pick it up and released it within a month of acquiring the film. Released just weeks before the election in America, ‘Borat Subsequent Moviefilm’ shines a light on the stupidity, ignorance and racist views of some American people.

When ‘Borat’ was released back in 2006, the majority of American public were none the wiser of who Borat really was. The fictional journalist was created years ago by British comedian Sacha Baron Cohen as a side character on the ‘Ali G Show’. After the first film was released 14 years ago, he became a household name to all. Everyone knows who Borat is. And this is evident very early on in the follow-up movie as he is instantly recognised in the streets by members of the public and harassed for autographs and pictures. Not only does he act as Borat the famous journalist, but Cohen is forced to become different characters across the film to achieve his goal. In his second outing, he is tasked with delivering Johnny the Monkey, a famous figure and porn star in Kazakhstan to Mike Pence (The Vice President of the United States) to bring pride back to the great state of Kazakhstan after they were humiliated by the outings of Borat in the first film.

As expected, this mockumentary is as damning as you’d expect as the views and beliefs of some American people in 2020 are highlighted. Filmed during the height of quarantine for Covid-19 and growing racial tensions, this has to be one of Cohen’s greatest pieces of work. His ability to transform into different characters to achieve his goals is remarkable. One piece of evidence to back this is around the middle part of the film, Borat is in search of somewhere to stay but is finding it difficult due to the streets and shops all being closed due to the virus. He comes across a local man who accepts his invitation to stay, which then forces Cohen to stay in character as Borat for five days! Whilst with them, they discuss how they think the Democratic party is worse than Coronavirus, Hilary Clinton drinks the blood of children and searches up QAnon (a right wing conspiracy theory website that says that all Democrats are cannibals and pedophiles) content online. Cohen’s tenacity to shine a light on what is a very ugly part of America’s history makes for uncomfortable yet laugh out loud moments that bring some much needed laughter and joy in what has been a very miserable year for many.

“Borat Subsequent Moviefilm” doesn’t quite match the first film’s quality but it feels like it’s a necessary comedy to help lighten the mood that we are all experiencing in 2020. Even if you’re not the biggest fan of the Kazakhstan journalist, I’m confident there will be moments that people can take away and find funny. With the addition of his fictional daughter Tutar (Maria Bakalova) who is brilliant may I add, it does bring a different balance to the mockumentary and allows a deeper dive into more pranks that Cohen wasn’t able to achieve on his own. “Borat Subsequent Moviefilm: Delivery of Prodigious Bride to American Regime for Make Benefit Once Glorious Nation of Kazakhstan” is available to stream right now on Amazon Prime.

Check out more from the team below!

It’s been five years since our last taste of James Wan in the horror genre. Since then, the Australian film maker made the DC film Aquaman, which was very much a move in a different direction for Wan. Malignant see’s him return to his roots and delivers a new story that isn’t connected to his END_OF_DOCUMENT_TOKEN_TO_BE_REPLACED

Shang-Chi and the Legend of the Ten Rings Review

The second entry into MCU’s Phase 4 movies, Shang-Chi and the Legend of the Ten Rings expands the cinematic universe to a completely new setting and characters but with some familiarities. This is our first look at our first Asian superhero on the big screen. Canadian actor Simi Liu portrays Shang-Chi. The son of a END_OF_DOCUMENT_TOKEN_TO_BE_REPLACED

The All Things Movies Podcast has hit episode 30 and its time for another episode of Crow’s Rating is Right, Pixar edition (part 1)!