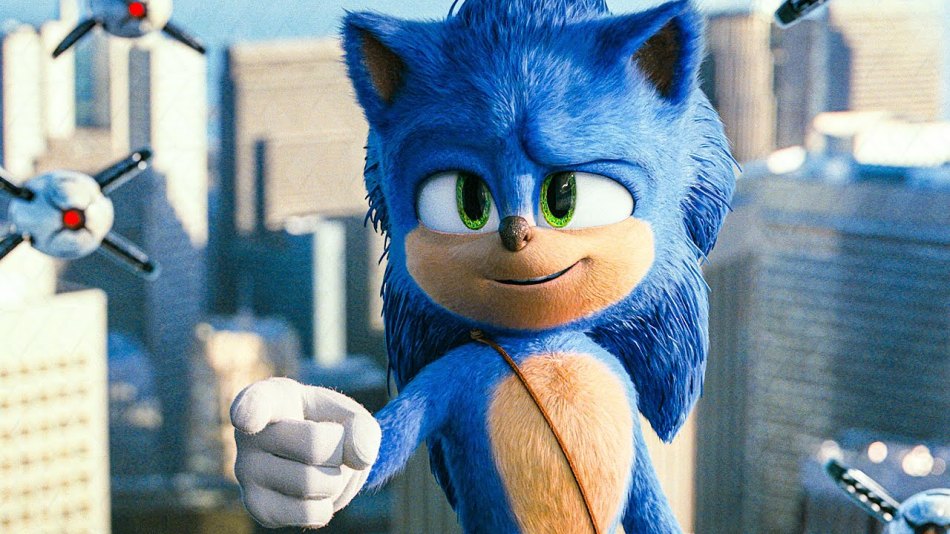 Video game adaptations haven’t got the best track record over the years. Countless times and efforts have been made to make some of the best computer games and transfer them straight to the big screen. The likes of ‘Max Payne’ and ‘Doom’ are great examples of huge failures to execute the transferral to a wider and more critical cinemagoer audience. But we forget the success of the ‘Resident Evil’ series starring Mila Jovovich that spawned many sequels that continued to bring in the people (for some reason). Recent success lies with 2019’s ‘Detective Pikachu’ which expertly created a great social following and favourable reviews that ultimately put it in good stead way before its eventual cinema release. With ‘Sonic the Hedgehog’, this is a completely new beast. The first trailer debuted last year and the internet exploded, for all the wrong reasons. The look for Sonic terrified people and it quickly became an embarrassment. The producers and studios acted fast and admitted their vision for Sonic was incorrect, pushed the film back months and as you do in modern times, Sonic was quickly forgotten. Fast forward to February 2020, Sonic is out in cinemas. Can Sonic’s new look help the film forget its negative journey to the big screen and add itself to the very short list of successful video game movies?

In case you are unsure what this film is about, let us explain. Sonic is a blue hedgehog that has arrived on Earth from another planet after being told to hide from his home planet. This is due to his super speed that is wanted by bad people on his home planet. After many years on Earth, Sonic’s abilities are discovered after accidentally setting off a power cut in a small town. The energy levels are through the roof from the power cut and because of this, the US government are quickly on hand to find out what caused it. They reluctantly send in mad scientist Dr. Robotnik (Jim Carrey) to find the source of the power cut. Sonic teams up with the local sheriff Tom (James Marsden) to help get him off Earth and away from danger.

The first thing to comment on is the obvious improvement of the overall look of our main protagonist. Getting a glimpse of Sonic’s new look in the new trailer a few months back instilled a sense of belief that the film may actually be okay. Safe to say, the film is well worth your trip to the cinema. Sonic is massively targeted towards the younger audience and is worth noting that this may not satisfy the older Sega nerds that played Sonic back in the day. Sonic flosses his way through California on a road trip, mimicking Quicksilvers scene stealing moments in ‘X-Men’, annoying the hell out of Marsden’s character and generally acting like how any kid would in his situation. As Sonic acts like a kid throughout the movie, this can go one or two ways with us. You may love his childish antics but on the other hand you can find him as irritating as the popcorn munching, seat kicking, phone handling child behind you in the cinema. Thankfully, we saw the positives in Sonic’s character on screen and allowed ourselves to be entertained as you should be in any kid’s movie. An additional positive that ‘Sonic the Hedgehog’ has is the resurgence of Jim Carrey as Dr.Robotnik. It feels as though the movie has transported the in-form Carrey from the 1990’s and placed him in the film. His animated performance injects a lot of energy to help pass the time whilst Sonic is absent from the screen. Carrey isn’t everyone’s cup of tea (as we found out with someone we watched the film with) so again this could be hit or miss with a lot of you guys! Thankfully, we are huge fans of Carrey’s work and it was great to finally see him do something decent for the first time in a long while.

‘Sonic the Hedgehog’ will benefit massively from what seems to be a very disappointing and quiet month for movies. With very little on offer in this month, Sonic is the boost February and audiences needed. Whilst Sonic won’t blow your socks off, it’s still enough to warrant your time and money to see on the big screen. Its lively visuals are one to see at the cinema, not one to necessarily enjoy in the comfort of your own home. It’s one to sit with a big bucket of popcorn and shamelessly laugh away to with a bunch of people who are clearly too old to be watching a kids movie.

Wooooah there! That’s not the only review we have on our website. Click below on the links to read more of our thoughts.
Queen & Slim Review
The Sh*t movie podcast #12 – 1998
Plus One (2020) Review

🎬 WHAT WE'RE WATCHING DURING LOCKDOWN 🎬 Anchorman Today's lockdown movie watch is the legendary comedy Anchorman starring Will Ferrell, Christina Applegate, Paul Rudd and Steve Carell. Directed by another comedy legend Judd Appatow, Anchorman follows Ron Burgundy, the best Anchorman on TV in the 70's and much loved by his audience in San Diego. When the network decide to bring in a female reporter for the show, all the men struggle to welcome her. This has to be one of Will Ferrells best films. I've always found to have a love hate relationship with Ferrell as I can find him extremely annoying and unfunny at times, but characters like Ron Burgundy allow him to be his best. Alongside him, two of my favourite actors in Paul Rudd and Steve Carell. Both of them make me laugh without even trying. Anchorman is available to buy on DVD and Bluray and available to stream right now on @skycinemait #anchorman #stevecarell #paulrudd #film #films #movie #movies #comedy #bluraycollection #blurayaddict #bluraycollector #blurayjunkie
Thanks to the awesome people at @arrowacademy, we are delighted to give you a sneak peek at the front cover of their new release Black Rainbow. "Mike Hodges (Flash Gordon, Get Carter) wrote and directed this supernatural chiller as a meditation on the human race’s ability to destroy the world, a gothic tale of suspense and the occult, guaranteed to send shivers down your spine". Black Rainbow is available to buy on 6th July 2020. #arrowvideo #bluraycollection #blurayaddict #bluraycollector #blurayjunkie #bluray #film #films #movie #movies
🎬 WHAT WE'RE WATCHING DURING LOCKDOWN 🎬 The Squid and the Whale Being in lockdown means that a lot of us have some extra time. Extra time to get round to watching films you wouldn't necessarily watch or feel the need to watch. A lot of the time it can pay it, sometimes it doesn't. This film is certainly one I'm glad I had the extra time. The Squid and the Whale revolves around a family in New York. The parents decide to separate and the film follows the consequent reaction from the family to the separation. Brilliant performances all round from the ensemble cast, especially Laura Linney and Jeff Daniel's. The Squid and the Whale is available now on @primevideouk #film #films #movie #movies #bluraycollection #blurayaddict #bluraycollector #blurayjunkie #thesquidandthewhale #noahbaumbach
Da 5 Bloods. The new Spike Lee joint coming to @netflixuk on June 12th. @netflixfilm #netflix #da5bloods #chadwickboseman #film #films #movie #movies
STEELBOOK SEASON Jurassic World #steelbookcollection #steelbook #steelbookcollector #steelbooks #steelbookaddict #steelbookcommunity #bluraycollection #blurayaddict #bluraycollector #bluraysteelbook #jurassicworld #dinosaurs #chrispratt
STEELBOOK SEASON Nightcrawler #bluraycollection #blurayaddict #bluraycollector #blurayjunkie #bluraysteelbook #steelbookcollection #steelbook #steelbookcollector #steelbooks #steelbookaddict #steelbookcommunity #nightcrawler #jakegyllenhaal
Advertisements
%d bloggers like this: