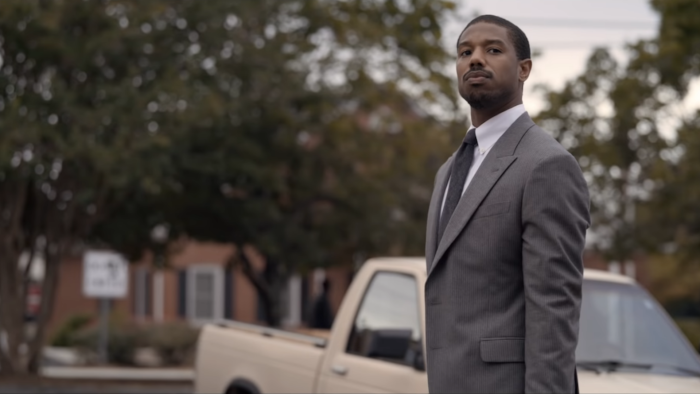 Michael B Jordan stars as the world renowned civil rights lawyer Brian Stevenson in ‘Just Mercy’. The film follows Stevenson at the start of his career. After just coming out of Harvard, he decides to set up a free to use legal aid service for prisoners on death row in Alabama. Set in the 1980’s, racism plays a huge part in the troubles and challenges that Stevenson faces being a black lawyer setting up shop in one of the most racist states in the United States. Stevenson doesn’t hang around and starts immediately to find clients who are in need of support. After meeting multiple inmates, one of them catches his eye. Walter McMillan (Jamie Foxx) was sentenced to death row after being charged of murdering a young white female in Alabama. After pleading his innocence to Stevenson, they both decide to work together as Stevenson starts to pick apart the shoddy evidence and lack of witnesses to the crime.

Writer and Director Destin Daniel Cretton shows his talent on the big screen. A relative unknown to most people, but introduced himself with his critically acclaimed debut ‘Short Term 12’. He has continued his run of form by delivering a masterful and powerful movie in ‘Just Mercy’. Cretton manages to utilise the camera to make you feel you are right with the characters. He is able to show the emotions of out characters brilliantly and manages to ooze the tension that you feel from the screen to the audience. There is one stand out scene that I haven’t been able to stop thinking about since watching the film. Inmate Herbert Richardson (Rob Morgan) makes his way to be executed by electric chair. Now we’ve seen many films where characters are killed by electric chair, but this one particular scene really got to us. The amalgamation of Crettons camerawork and Morgan’s impeccable and heart-breaking performance in this scene had us close to tears.

As mentioned, the side character of Herbert Richardson played by Rob Morgan is a brilliant role but we are treated to a sublime performance by the ever-growing and multi-talented actor that is Michael B Jordan. Over the past few years, Jordan has been able to show us that he can play a mean bad ass villain in 2018’s ‘Black Panther’, a physical powerhouse in 2015’s ‘Creed’ and now, Jordan shows his versatility of being able to play a character with a good heart and wit to save potential innocent lives on death row in ‘Just Mercy’. Supported in his role by Jamie Foxx who plays death row inmate McMillan, Foxx has always been a consistent actor in his time in Hollywood and continues to add to his list of great performances with this film. Brie Larson also stars in ‘Just Mercy’ as Alabama local Ava Ansley who helps Stevenson with setting up his company. Disappointedly, Larson is left out of the majority of the movie and is rarely given a moment to shine. Having an Oscar winner in your film and not utilising her is a big mistake as this could have made this great film into an even better one.

As much as we loved this movie, we couldn’t help but think that the film is overly long. Even though there is a lot to tell, the film itself does seem to throw itself across the finish line as it’s desperately runs out of steam. ‘Just Mercy’ would become even more effective if it was trimmed from its 2hr 16m run time to just over two hours. This way it would become harder hitting that it already is and cutting out any unnecessary scenes that peg it back slightly. ‘Just Mercy’ is released in UK cinemas towards the latter end of January 2020.

You’ve reach the end of the review! Yay! Now time for some more reading if you are up for it!
Jojo Rabbit (2019) Review
The Gentlemen Review
The Sh*t movie podcast #10 – 1997

#1917 is released in the UK and we have our thoughts on the WWI movie directed by Sam Mendes. As ever, go to www.allthingsmoviesuk.com to read the review! #oscars #academyawards #bafta #goldenglobes #sammendes #war #warmovie #wwi
#bombshell is out in UK cinemas tomorrow. Our review is live on our website www.allthingsmoviesuk.com right now! #fox #news #scandal #movie #film #review #nicolekidman #charlizetheron #margotrobbie
Now watching: The Killing of a Sacred Deer. #film #movie #comedy #drama #thriller #colinfarrell #barrykeoghan #yorgoslanthimos
Look how happy Mike Myers is to be the feature of our new podcast, Crow's The Rating is Right! This is our game show podcast where Crow gets the other guys to guess whether the metascore of his movies! Make sure to listen on Spotify and iTunes!! #spotify #itunes #podcasting #podcasts #podcast #film #movie #mikemyers #comedy #shrek #austinpowers #waynesworld
1999 has been recorded! Alongside that, we recorded another episode of The Crow's Rating is Right! These new episodes will be getting released slowly across the next month so make sure to keep an eye on our social media channels! #podcasting #podcasts #podcast #moviepodcast #filmpodcast #movie #movies #film #films #1999 #bradpitt #fightclub #thematrix
💥 Review Alert 💥 Just Mery is released in UK cinemas on January 17th at cinemas such as @cineworld @odeoncinemas @vue @everymancinema and more! Our verdict can be read on our website www.allthingsmoviesuk.com #justmercy #michaelbjordan #drama #2020 #film #films #movie #movies #prison #prisoner #deathrow #alabama #america
Advertisements
%d bloggers like this: