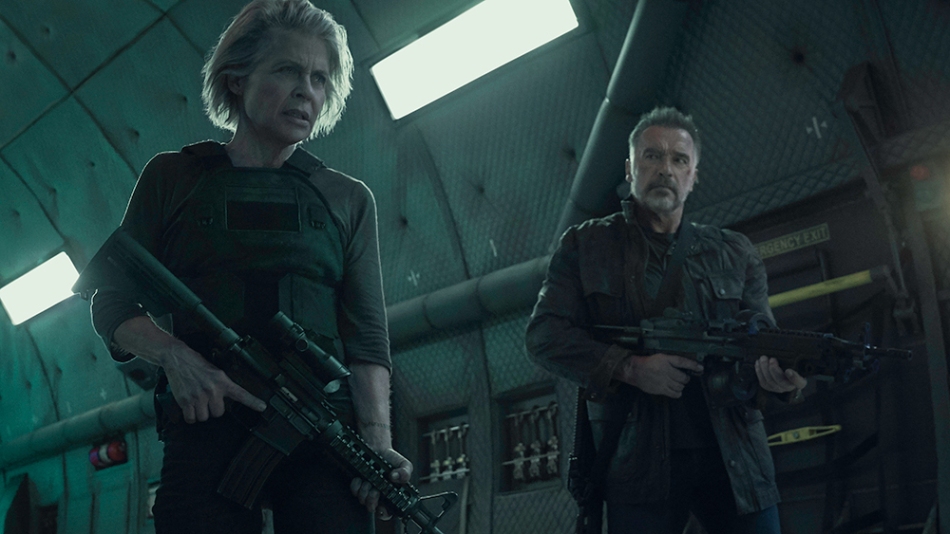 After many failed attempts at continuing or rebooting the Terminator story, we are now forced to watch another attempt to claw back Terminator fans back to the franchise. What feels like a last chance saloon for the series after the disastrous ‘Terminator Salvation’ in 2009 and the car-crash attempt at a new trilogy with ‘Terminator Genisys’ in 2015, does ‘Dark Fate’ crash and burn like its recent attempts or is it third time lucky? Thankfully, it’s the latter.

‘Terminator: Dark Fate’ is the third effort in ten years at refreshing the series. The advantage this new film has is that James Cameron now owns the rights to the films and has creative control. Knowing the original creator and Director is back is positive news. The famed Director only returns as a Producer in this film, as ‘Deadpool’ director Tim Miller takes on directing duties. The film is set 22 years after Judgment Day (which didn’t happen due to Sarah and John Connors heroics in ‘Terminator 2’) and picks up with the new character Dani (Natalia Reyes). The Mexican factory worker is hunted by the new and highly advanced Rev-9 Terminator (Gabriel Luna). Dani is a threat to the future for the machines. Grace (Mackenzie Davis), an enhanced human is sent back in time to present day to protect Dani and to ensure everyone on earth has a future. Along the way, they encounter the legendary, most wanted, Terminator hunter Sarah Connor (Linda Hamilton). She joins the group of women as they try to find a way of destroying this new Terminator and ensuring Dani’s survival.

‘Terminator: Dark Fate’ takes a leaf out of ‘Star Wars: The Force Awakens’ book. Instead of veering off in completely new territory in regards to characters and structure, they both use original movies from the franchise as a template for success. Where ‘Force Awakens’ uses the highly successful formula of ‘A New Hope’ to be successful, ‘Dark Fate’ uses ‘Terminator 2’ as a guide to ensure they safely deliver an enjoyable new addition to the franchise, without taking too many risks. In this movie, Gabriel Luna’s character is very similar to Robert Patrick’s in the second film of the franchise. Both technologically more advanced that Arnie’s Terminator character and technically more of a threat in regards to skills, speed and fighting ability. I really enjoyed Gabriel Luna, he came across as relentless and dangerous at the same time. Obviously he has nothing on Robert Patrick, but I don’t think Luna could have done much more. He did enough to be entertaining on the screen and that’s all we wanted. What were best about the film though were the three leading actors in Davis, Hamilton and Reyes. They all have a purpose in the movie and continue the trend of leading women in the franchise (famously lead by Hamilton in the first two films and Emilia Clarke as Sarah Connor in Genisys). The standout is the return of the original Terminator killing machine that is Linda Hamilton. She perfectly carries on her character and injects much needed emotion and power as Sarah Connor, something that the Terminator films have lacked since her absence from the franchise.

Visually, it’s not the best of films in the series. Where the original two are still stunning to this day, even though they are both nearly 30 years old, the predecessors have all seemed to want to rely on heavy CGI effects that just haven’t had the same effect as the first two. ‘Dark Fate’ unfortunately continues that trend as the CGI looks cartoonish at the best of times and does take away the enjoyment of the film. Thankfully, Tim Miller, director of the film creates a lot of enjoyable set-pieces and regular action to cover the cracks of the sub-par CGI.

In all honesty, we thought this was going to be a train wreck. It’s far from it. It’s an enjoyable movie, decent at times. It does enough to warrant more Terminator films as James Cameron has plans to make this a new trilogy. Time will tell whether this gets good reactions from the fans and whether it makes money, but if this was to be the last attempt to reignite the franchise, then at least it will go down with its head held high.

If you liked this review, then read some more below!
Terminator Genisys Review
The Sh*t movie podcast #7 – 1995
Judy (2019) Review