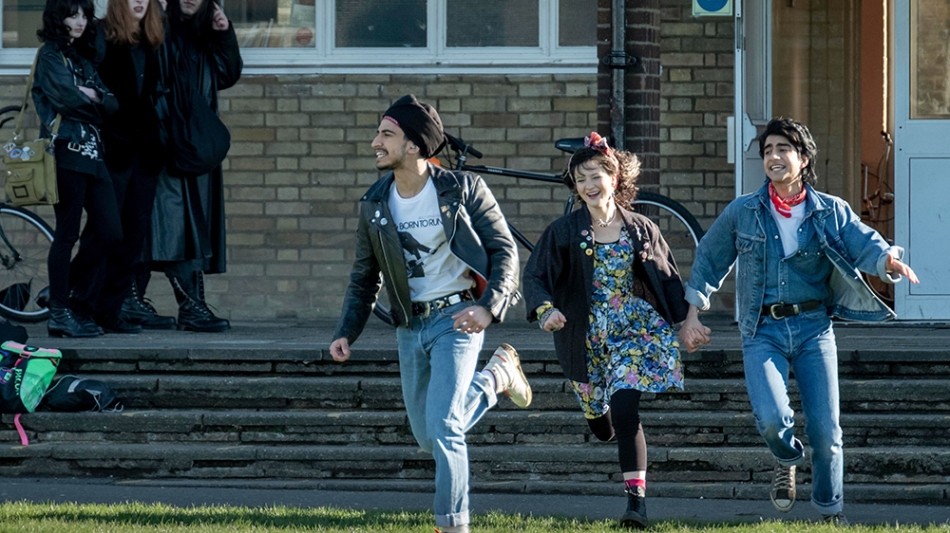 The current trend at this moment in cinema seems to be centred on releasing films based on musical biopics (such as ‘Rocketman’ & ‘Bohemian Rhapsody’) or in this case, using the music of a particular artist to which is pivotal to the storyline. ‘Blinded by the Light’ is the new film by Gurinder Chadha, who is well known for her directorial work on ‘Bend it Like Beckham’, ‘Angus, Thongs and Perfect Snogging’ and most recently, the highly acclaimed TV show ‘Beecham House’. Her new project is based on a true story about teenagers struggles of growing up in a Pakistani family in 1980’s England where faced by adversity at almost every turn. The plot follows one particular teenager, ‘Javed’ (Viveik Kalra) whose life is changed once introduced to the music of American singer-songwriter, Bruce Springsteen.

With an almost unknown cast, ‘Blinded by the Light’ benefits massively from this. Apart from Hayley Atwell, the rest of the cast was unknown to me at least. The benefits of having an unknown cast are that you cannot draw comparisons to previous performances by the actors and thus provides a potentially better narrative of that actor as the. I now associate Kalra as Javed for example. Kalra’s ability to take the focal point of this film is impressive, it shows the artistry and development of newcomers into the industry, showing us all that an IMDB credits list is not the be-all and end-all. The lack of professional acting experience (based off of his IMDB), let alone experience of leading what will a widely released film in the UK shows, demonstrates his raw talent and works up an excitement for seeing him in the future. Adding to this, not only does he act, but he sings and dances his way through showing his vast talent; he is no one-trick pony.
Furthermore, it’s a joy to see Chadha continue to work on the big screen and showcase her talents as an esteemed director. I have enjoyed her work compilation which includes comedy dramas like ‘Bend it Like Beckham’ and, like this film propelled the career of Keira Knightley, I hope that ‘Blinded by the Light’ will propel that of Kalra’s. This is by far and away her best work to date as ‘Blinded by the Light’ perfectly encapsulates what it would had been like for a young Pakistani growing up in Luton, one of the roughest and racist areas of the UK during England’s poorest and toughest times in the 1980’s. Not only that, but it showcases Bruce Springsteen’s music and with ease relates the lyrics to the characters life.

On that note, the musical numbers that are in the film a joy to watch and, no matter how you may try you cannot help the grin that will stretch across your face throughout the film. The impact it had was similar to the emotional journey I experienced whilst watching ‘Love, Simon’ (June 2018; link at bottom of page for ‘All Things Movies’ review). As both films are independents they are not as widely viewed they are not as widely seen. ‘Blinded by the Light’ was a gift from the Cineworld secret screening, it was pleasure to watch and I hope this encourages people to watch films out of their usual montage

‘Blinded by the Light’ is definitely one of the films to see this summer. Save your money from the standard blockbusters that will no doubt bring in the masses and instead I implore you spend your money seeing this film. I guarantee you will have a great time and you will be helping this film to get the recognition it deserves.

0 comments on “Blinded By The Light Review”