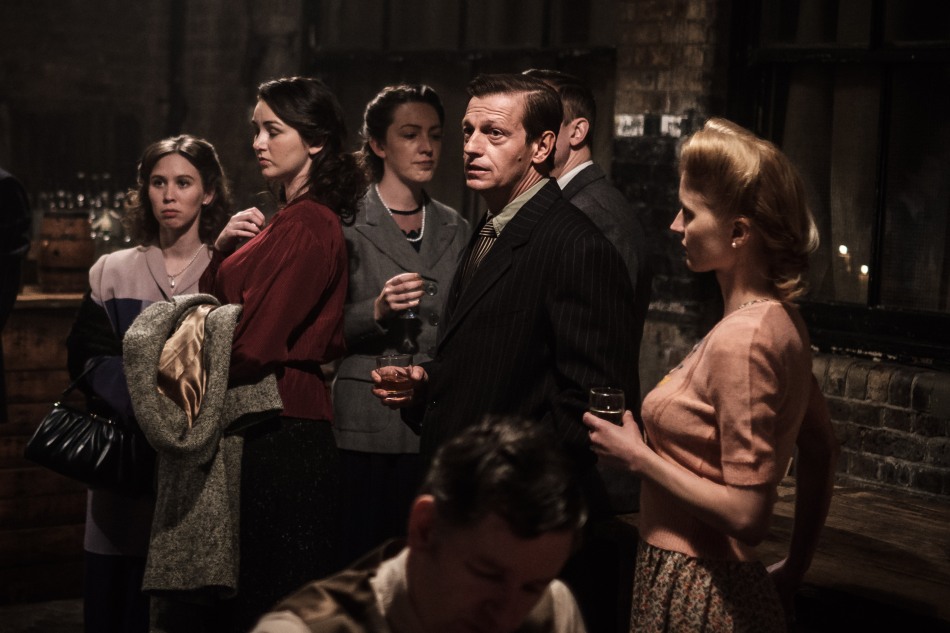 ‘Once Upon a Time in London’ is a British produced film set around the 1930’s and the battle between two mob families battling it out to dominate the organised criminal underworld. Starring the likes of Jamie Foreman (Layer Cake), Andy Beckwith (Game of Thrones), Leo Gregory (Green Street) and Kate Braithwaite (Little Deaths), the film itself is surrounded by a lot of actors who have played bit parts in many TV shows and movies. When it comes to extending their screen time to more than 10 minutes, the majority of the cast do struggle to keep the film afloat at the best of times. What doesn’t help the film is having ex-footballers and participants of ‘X-Factor’ star in the film when they clearly don’t have any acting talent. The inexperience shows big time, especially for a film that is clocking towards the two hour mark.

I have to admit, watching this was a real struggle. As mentioned above, the run time is exceptionally long for what it is. The excessive use of violence and sex was unnecessary and the film felt too carbon copied from other projects such as ‘Peaky Blinders’ and any Guy Ritchie film. I draw these two comparisons due to the time period that is similar to the UK TV show and the use of freeze frames used in this film to narrate and explain a characters backstory, which is used famously in Guy Ritchie films like ‘Lock Stock’ and ‘Snatch’.  There was no originality in this film and it’s certainly one I wouldn’t be recommending.

Once Upon a Time in London is available on DVD in the UK on the 10th June.

Read our thoughts on other films we have on our site!
Booksmart Review
Killer Party (Monster Party) Review
Batman Vs Teenage Mutant Ninja Turtles Review

0 comments on “Once Upon a Time in London Review”

#blackouttuesday
🎬 WHAT WE'RE WATCHING DURING LOCKDOWN 🎬 The Mummy: Tomb of the Dragon Emperor Having been a fan of the first two mummy films (albeit both are reboots and are probably about the 12th films for the Universal monster), you would have assumed that finishing the trilogy would have been a no-brainer. Alas, after hearing the poor reviews and sitting through the dire Dwayne Johnson spin off (2002's, The Scorpion King), it turns out the only push I needed to finish the franchise was a world stopping lockdown, no food in the cupboards and to finally compelete the 7 hour Homes Under The Hammer marathon I had on record. Was it worth it? I hear you cry! No...it absolutely was not! Moving away from Imhotep and focusing on another region - in this case, China - on paper, seems the ideal way to drive the series forward. In reality however, the plot is epically convoluted, pulling similar threads as the original adventures but lacking the charm and plunder they were known for. Brendan Fraser stands alone amongst an ensemble so re-cast, it makes the film feel, look and act completely separate from anything that came before it. Terrible accents and eye watering dialogue do little to aid the situation, exascerbating the huge hole left by the series regulars choosing not to return. Given my love the first 2, its truly frustrating that a spin off and poorly specked out sequel have ended a franchise that was funny, engaging and above all, good fun. I would say a reboot would help...but Tom Cruise didn't have much luck there either! The Mummy 3 is available now @nowtv ...and presumably that also means @skytv Let us know what you think! #themummy #tombofthedragonemperor #jetli #brendanfraser #film #films #movie #movies #blurayaddict #bluraycollection #bluraycollector
STEELBOOK SEASON Star Wars: The Force Awakens I remember pre ordering this before I had even see the film on opening night in IMAX. The level of anticipation and excitement were sky high for the return of Star Wars and I felt elated after viewing it for the first time. Although it isnt overtly original, it's a lot of fun and holds up with Disney's turmultous start to their Star Wars journey. The steelbook itself is awesome! Kylo Ren was by far my favourite character of the new trilogy and it made the steelbook even more appealing knowing he would be on the front of the steelbook. #starwars #theforceawakens #kyloren #blurayaddict #bluraycollection #bluraycollector #blurayjunkie #bluraysteelbook #steelbookcollection #steelbook #steelbookcollector #steelbooks #steelbookcommunity #steelbookaddict #steelbookbluray
This beautiful steelbook has sold out so quickly on @zavviuk! The first 4K version of the classic Spartacus starring the late Kirk Douglas. Hopefully more stock comes in! #4kultrahd #4ksteelbook #steelbookcollection #steelbook #steelbookcollector #steelbooks #steelbookaddict #steelbookcommunity #spartacus
🎬 WHAT WE'RE WATCHING DURING LOCKDOWN 🎬 King Kong The time has come. The perfect time to watch a three hour plus movie about a big ape. I had seen this before, but it was many years ago. As it turns 15 years old this year, what better way to watch it again and see if I remembered liking it. To its credit, it still holds up well. What is impressive is the CGI for Kong and the mocap work that Andy Serkis delivers. Apart from that, the film comes across as ambitious in its intentions to be an epic piece of cinema, but it just fades away. My concentration through this was horrendous and I just couldn't find moments of the film to keep me engaged. For a three hour movie about Kong, I'm expecting to be entertained. Peter Jackson gave his all directing this, and had a lot to prove in terms of keeping up his very high standards as he came off from directing The Lords of the Rings trilogy. Unfortunately, he has never reached those heights and King Kong is one that fades into my memory and have no real intention of watching again anytime soon. King Kong is available to watch on @netflixuk right now. Have a watch if you havent seen it. If you like it or agree, let me know in the comments below! #bluraycollection #bluray #bluraycollector #blurayaddict #blurayjunkie #kingkong #newyorkcity #peterjackson
@zavviuk bringing out those OG Star Wars movies on 4K steelbook! What do you guys think, worth buying? #4kultrahd #4ksteelbook #steelbookcollection #steelbook #steelbookcollector #steelbooks #steelbookaddict #starwars #returnofthejedi
Advertisements
%d bloggers like this: