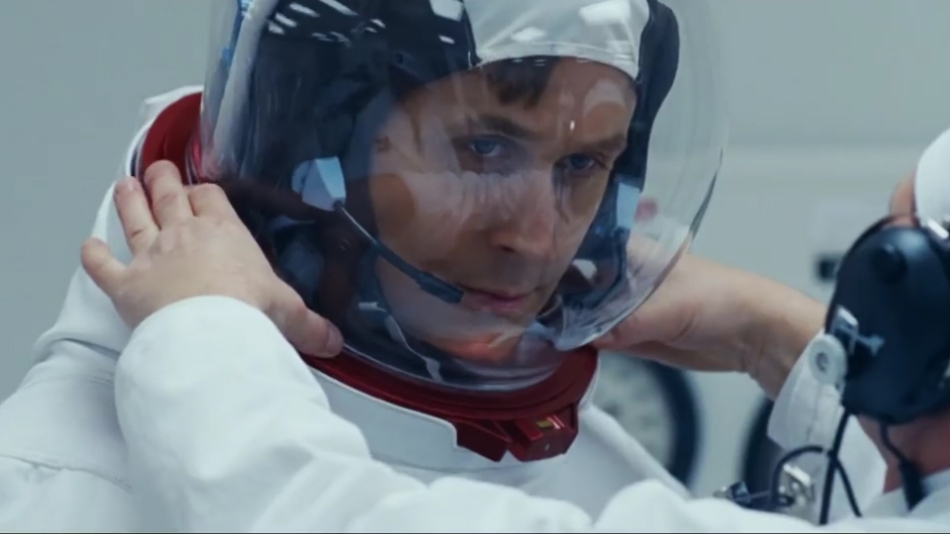 ‘First Man’ explores the life of American astronaut Neil Armstrong, covering the key parts of his life; his turbulent and emotional years before the famous moon landing. Ryan Gosling stars as Neil Armstrong and again shows his calibre as an actor. Many may be clouded by his handsome looks and in turn overlook his acting, but never underestimate the talent and range provided by Ryan Gosling. Already nominated for two Academy Awards, the 37 year old could be eyeing up his third nominations at the Oscars early next year with this performance. Along with the fantastic portrayal of Janet Armstrong by the ever brilliant Claire Foy, Gosling is left with the responsibility to carry the film to the heights it achieves.
Gosling towers over every single actor and is by far the best part of the whole movie. I would be as bold to say it’s his best performance since ‘The Ides of March’ and ‘Drive’, both coming out in the year of 2011. His overall performance is strongest when his feet are firmly planted to the planet called ‘Earth’. The way he conveys his hurt and loss for his young daughter, Karen, and the loss of other colleagues in tests and trials for their mission to the moon is as strong as I’ve seen Gosling perform. As mentioned, Claire Foy continues her fabulous run of great performances on screen; however, it would have been more than ideal to experience more of her character and her development. Instead of the many average male actors in the film, such as Kyle Chandler and Jason Clarke, who are both normally so strong, but fall way behind Ryan Gosling’s exceptional portrayal as Neil Armstrong in ‘First Man’.

‘First Man’ is a good movie, one that is injected with a large amount of drama. Saying that however, I did have higher expectations for the film, maybe as I assumed it would feature more of a sci-fi element, as it covers one of NASA’s most famous missions. I can’t deny how impressive the Moon landing scene is, not only because of how it looks visually, but instead due to the build up to this scene, the journey taken and accomplished and the clear portrayal of relief after the completion of this mission. I wasn’t blown away as I left the cinema but the more and more I think about this film, the more I realised that I enjoyed it. Adding in the beautiful soundtrack by Justin Hurwitz which really helps make the film what it is and exploring the different elements that ‘First Man’ possesses. STRUCTURE – RELEVANCE TO THIS PARAGRAPH? A Sci-Fi Drama that revolves around loss, family and space exploration. Whilst it may not be Damien Chazelles best film that he’s made, albeit it’s his third directorial effort, it has still added another impressive film to his resume alongside ‘La La Land’ and ‘Whiplash’ What ‘First Man’ does for the director is that it shows how extremely talented he is, not only in Musicals like ‘La La Land’ but also in Sci-Fi’s with ‘First Man’.

Who will be watching the BAFTAS?
What are your thoughts on the show so far?
Who has seen Portrait of a Lady on Fire?
What's your favourite Russell Crowe film?
Who is looking forward to Sound of Metal?
What are you watching this Easter?
Advertisements
%d bloggers like this: