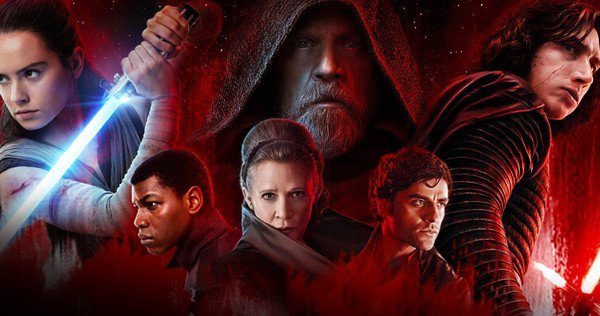 The wait is over. 2 years have passed since the last episode of Star Wars and we are now halfway through the new trilogy. The Last Jedi picks up immediately after the events of The Force Awakens. Rey finds the estranged Luke Skywalker to ask for help against the First Order, Finn is in a coma after his injury from Kylo Ren and the First Order are gaining ground and strength on the Resistance. I’m very conscious on my wording in this review and it’s intentionally shorter than normal as it is spoiler free.

Big questions were left on everyone’s minds after watching The Force Awakens. Going into The Last Jedi, I had many thoughts going into it. The obvious ones come to mind; who are Rey’s parents and who on earth is Snoke? I’m obviously not going into detail if they are answered or not. But personally, The Last Jedi does very well in carrying on straight from the events of the last film and carrying on even stronger. The Force Awakens was a very light-hearted movie that pulled at the nostalgia strings massively but Rian Johnson; director of The Last Jedi completely pulls you away from that environment and doesn’t hold back. Twists galore throughout and it’s never obvious to tell what is going to happen. The character development for Rey and Finn are well done, but it’s the way that Kylo Ren completely comes into his own. By far and away the best character in the whole film, the conflicted villain is even angrier this time round.

Johnson does well though to keep some elements of humour to the film, especially with the Porg’s relationship with Chewbacca. But when it goes dark, it goes dark. The tone of the film is perfect; nothing is hunky dory in the universe. Things are going down and no one is safe. Everybody has their purpose in the film and each character has their moment. Coming to the end of the film, I felt completely satisfied. The Last Jedi engrossed me from the opening crawl to the end credits. Being the longest film in the series, Rian Johnson does incredibly well to make sure it’s an enjoyable ride.

In what direction episode 9 goes towards will be an interesting one. There are some open stories that are still yet to be closed, yet there are many more that I assume will be addressed further down the line. The Last Jedi is not without its faults, but they are very minimal. CGI at times was a little shaky, not absolutely stunning at times, but it’s made up by the fantastic direction by Rian Johnson that made this epic blockbuster feel just like a drama. The excitement levels are there for future Star Wars films and for me, that’s a job well done. 4.5 out of 5 stars.

Top 10 films of the year – The Big Dudes perspective!

Who will be watching the BAFTAS?
What are your thoughts on the show so far?
Who has seen Portrait of a Lady on Fire?
What's your favourite Russell Crowe film?
Who is looking forward to Sound of Metal?
What are you watching this Easter?
Advertisements
%d bloggers like this: