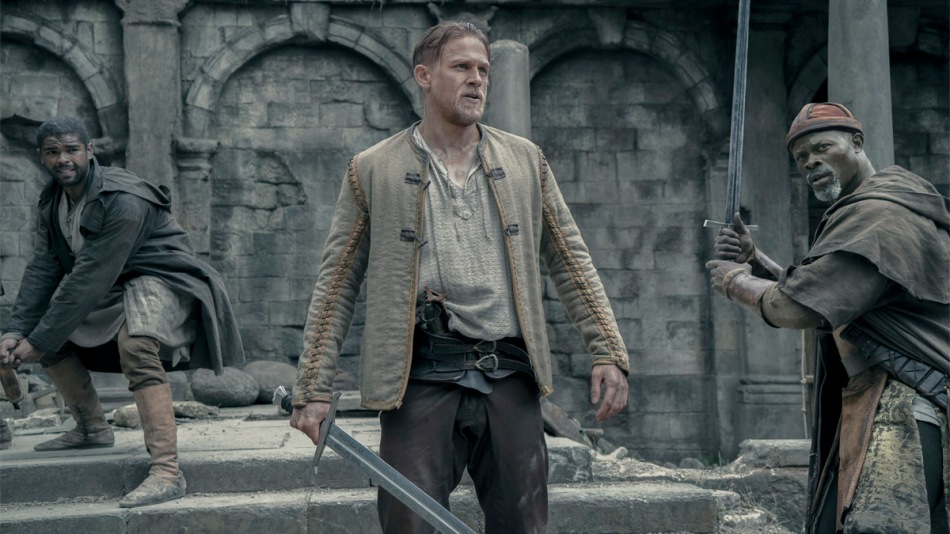 King Arthur certainly has some of the signature moments a Guy Ritchie films offers, but an unfortunate lack of meaningful narrative won’t rank this high on the directors list.

Embellishing on the folklore, King Arthur: Legend of the Sword tells the story of the titles namesake on his quest to become King of England. During the brutal dethroning of his father, Prince Arthur escapes the grasp of his evil uncle to the suburbs of Londinium. After a series of unfortunate events (in other words – ‘too many little bits to write it all here’), Arthur finds himself at the forefront of a queue, pulling the mighty Excalibur from the stone and unleashing his destiny to take down his evil uncle, the King.

A true tale of two halves, the first works well in combining the strengths of Ritchie with the atmosphere of medieval England. Pretty camera shots merged with great editing touches certainly start the film off the right foot, constructing an interesting tone while at the same time setting the scene of the time. Unfortunately though, once we move into the second half, Ritchie seems to move out of his comfort zone and as such, finds himself descending into a Zach Snyder-like embrace of incoherent CGI madness. The result is an odd blend of Lock, Stock with the final moments of Batman Vs Superman…and it doesn’t really work.

This battle of halves continues as we move into the story. While there certainly are some great scenes that lift the narrative and set the tone well, the overall story lacks from the ebb and flow of traditional plot lines. Opening with a rather overinflated intro, it lends itself to over-repetitive use of flashbacks, locking itself away from character development and as such, from any real subplots. The result is that certain elements of the film never develop; whether it be the threat of the King or the motives our protagonist has for change, the audience is never truly given a reason why things on screen were happening.

Rounding off the divided production nicely comes a mixed bag of casting. Charlie Hunnam does enough to make him interesting as the lead but the scale often tips from lovable rogue to frustratingly arrogant more times than you would like to see from the hero. Jude Law also faces the same issues, swinging from one villainous trope to another, never really building an imposing villain from the already thin narrative.

Overall King Arthur: Legend of the Sword is an easy but forgettable watch from the usually proficient director. While hitting the mark with some signature moments and keen aesthetics, the overall story lets the film ever step you take along King Arthur’s journey. 2.5 stars out of 5.

0 comments on “King Arthur: Legend of the Sword Review”