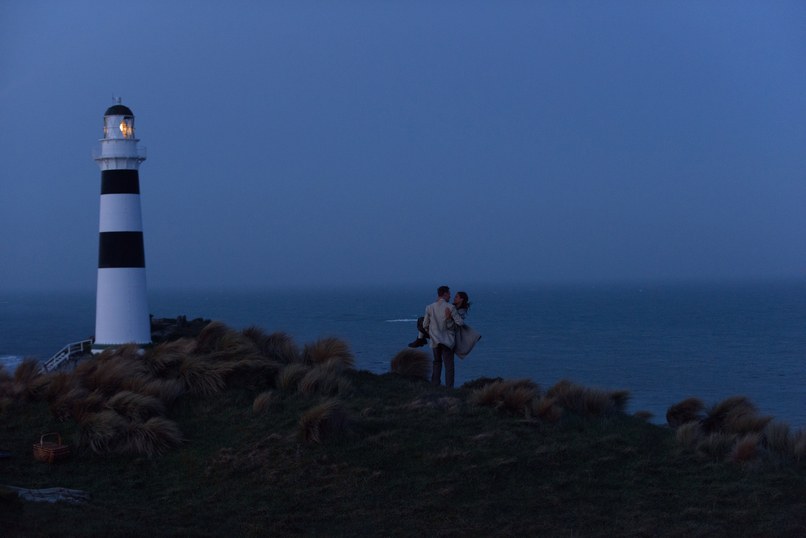 Acclaimed and loved director Derek Cianfrance returns for his first film in four years to direct Michael Fassbender and Alicia Vikander in The Light Between Oceans. Based on the popular novel, Fassbender plays Tom, a WWI veteran who looks after a lighthouse in Western Australia with his wife (Vikander). Secluded on a little island, the couple decide to start a family and eventually, Tom’s wife Isabel falls pregnant. Tragically, Isabel suffers from two consecutive miscarriages which leave the couple devastated. After the terrible loss of their two unborn children, Tom and Isabel encounter a washed up boat with a man and baby inside. Surprisingly, being out at sea for what could have been weeks or months, the baby has survived the journey, but unfortunately, the man didn’t. Seeing this as a gift from god, Tom and Isabel take in the young baby and keep it as their own. Deciding to bury the body and get rid of the boat, the couple are forced to live a lie about their new baby.

To say I was moved while watching this film would be an understatement. The Light Between Oceans has to be one of the best dramas I have seen for a very long time. Fassbender and Vikander’s performance are breath-taking and heart-breaking. Their characters Tom and Isabel go through a rollercoaster ride of emotions and these actors are the perfect fit. Their charisma, charm and understanding of their roles are perfect. I would go as far to say that Vikander and Fassbender should be in contention for Oscar nods once the season rolls around. I think what helps the two perform so well on-screen together is that they are both a couple off-screen. Their passion, love and sincerity for each other resonate on screen and deliver one of the best performances from a couple on screens for a while.

Adding onto the sheer class of acting that I saw, director Derek Cianfrance continues his brilliant run behind the camera. As big fans of Blue Valentine and The Place Beyond the Pines, the American film maker utilizes his strengths from his previous films to deliver one of the most beautifully made pieces of film this year. Visually, it creates the scene for the actors to then lay down the foundations which makes this film so good. Cianfrance seems to be the master of delivering drama in the purest of ways. Everything that the characters do on-screen can completely be understood by the audience. The director helps by bringing a sense of closeness to these characters. Straight from the opening scene, he uses close-ups so we get intimate with Tom and Isabel from the get go. Cianfrance continues to make films that want to bring me to tears and break me down. He continues this trend with his new film and has delivered a beautiful yet heart-breaking picture.

To put the icing on the cake of this film, we have the superb Alexandre Desplat to score the movie. The Oscar winner delivers an incredible soundtrack that slot into the film perfectly. If it wasn’t the beautiful directing, or the acting that was going to tear me down into a million pieces, its Desplat’s score that so nearly brought me down into tears. For the first time in a while, I cannot think of one negative thing for this film. For me, it’s perfect in so many ways. Fassbender and Vikander’s acting is second to none and the directing is flawless. It’s an incredibly sad film to watch at times but I was blown away from the start right until the end. It’s been a while people, but The Light Between Oceans gets 5 stars from me.

3 comments on “The Light Between Oceans Review”

🎬 WHAT WE'RE WATCHING DURING LOCKDOWN 🎬 King Kong The time has come. The perfect time to watch a three hour plus movie about a big ape. I had seen this before, but it was many years ago. As it turns 15 years old this year, what better way to watch it again and see if I remembered liking it. To its credit, it still holds up well. What is impressive is the CGI for Kong and the mocap work that Andy Serkis delivers. Apart from that, the film comes across as ambitious in its intentions to be an epic piece of cinema, but it just fades away. My concentration through this was horrendous and I just couldn't find moments of the film to keep me engaged. For a three hour movie about Kong, I'm expecting to be entertained. Peter Jackson gave his all directing this, and had a lot to prove in terms of keeping up his very high standards as he came off from directing The Lords of the Rings trilogy. Unfortunately, he has never reached those heights and King Kong is one that fades into my memory and have no real intention of watching again anytime soon. King Kong is available to watch on @netflixuk right now. Have a watch if you havent seen it. If you like it or agree, let me know in the comments below! #bluraycollection #bluray #bluraycollector #blurayaddict #blurayjunkie #kingkong #newyorkcity #peterjackson
@zavviuk bringing out those OG Star Wars movies on 4K steelbook! What do you guys think, worth buying? #4kultrahd #4ksteelbook #steelbookcollection #steelbook #steelbookcollector #steelbooks #steelbookaddict #starwars #returnofthejedi
🎬 WHAT WE'RE WATCHING DURING LOCKDOWN 🎬 Anchorman Today's lockdown movie watch is the legendary comedy Anchorman starring Will Ferrell, Christina Applegate, Paul Rudd and Steve Carell. Directed by another comedy legend Judd Appatow, Anchorman follows Ron Burgundy, the best Anchorman on TV in the 70's and much loved by his audience in San Diego. When the network decide to bring in a female reporter for the show, all the men struggle to welcome her. This has to be one of Will Ferrells best films. I've always found to have a love hate relationship with Ferrell as I can find him extremely annoying and unfunny at times, but characters like Ron Burgundy allow him to be his best. Alongside him, two of my favourite actors in Paul Rudd and Steve Carell. Both of them make me laugh without even trying. Anchorman is available to buy on DVD and Bluray and available to stream right now on @skycinemait #anchorman #stevecarell #paulrudd #film #films #movie #movies #comedy #bluraycollection #blurayaddict #bluraycollector #blurayjunkie
Thanks to the awesome people at @arrowacademy, we are delighted to give you a sneak peek at the front cover of their new release Black Rainbow. "Mike Hodges (Flash Gordon, Get Carter) wrote and directed this supernatural chiller as a meditation on the human race’s ability to destroy the world, a gothic tale of suspense and the occult, guaranteed to send shivers down your spine". Black Rainbow is available to buy on 6th July 2020. #arrowvideo #bluraycollection #blurayaddict #bluraycollector #blurayjunkie #bluray #film #films #movie #movies
🎬 WHAT WE'RE WATCHING DURING LOCKDOWN 🎬 The Squid and the Whale Being in lockdown means that a lot of us have some extra time. Extra time to get round to watching films you wouldn't necessarily watch or feel the need to watch. A lot of the time it can pay it, sometimes it doesn't. This film is certainly one I'm glad I had the extra time. The Squid and the Whale revolves around a family in New York. The parents decide to separate and the film follows the consequent reaction from the family to the separation. Brilliant performances all round from the ensemble cast, especially Laura Linney and Jeff Daniel's. The Squid and the Whale is available now on @primevideouk #film #films #movie #movies #bluraycollection #blurayaddict #bluraycollector #blurayjunkie #thesquidandthewhale #noahbaumbach
Da 5 Bloods. The new Spike Lee joint coming to @netflixuk on June 12th. @netflixfilm #netflix #da5bloods #chadwickboseman #film #films #movie #movies
Advertisements
%d bloggers like this: