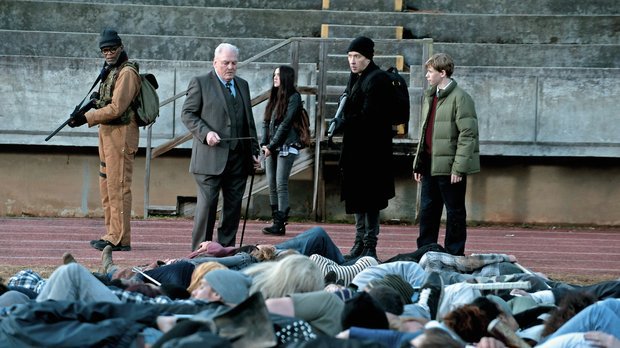 Stephen King is one of the greatest writers and has been for decades. His work has been adapted many times including The Shining, Carrie and It. The latest book of his to be adapted is his 2006’s novel Cell. Not following in the steps of the brilliant adaptations of his work, Cell has to be one of the worst out there. Starring John Cusack and Samuel L. Jackson, the story is set in a post-apocalyptic world as a mysterious signal wipes out every single human using a cell phone. While some fall to their death, the majority of them turn into crazed killers that prey on the unaffected humans. As John Cusack’s character is trying to survive in this ridiculous environment, he is also trying to get back in touch with his son.

The once great John Cusack and Samuel L Jackson both embarrassingly drag themselves through what is a testing 90 odd minutes. Their efforts are at a bare minimum throughout the entirety of the film. Their acting is borderline terrible, nearly unusable, it makes me wonder why they even bothered at all. There’s even a point when Sam Jackson is being chased by some mental case and he doesn’t even bother running, or even look like he’s running! In all terms and levels of acting, this is probably the worst I’ve seen in a while. Cusack constantly looks surprised as his mouth is wide open all the way through the film. The bored, morbid look isn’t something that compliments a fading actor.

Tod Williams, the director of this terrible piece of work hasn’t done any directing since 2010’s Paranormal Activity 2. I think that huge gap between films has shown as his shoddy camerawork is evident. He fails to capture anything that has a purpose and executes the scenes in such an amateurish way that is almost laughable. If it isn’t his attempts at trying to create an ‘artsy’ shot that come out looking completely pointless, it’s then shoving the camera towards the sun and losing focus. This work is something I would expect from a student director on their first day.

The most disappointing part of this whole film is the awful screenplay. You can normally expect a bad adapted screenplay when it’s not done by the original writer. Surprisingly, it’s actually been adapted by the author himself, Stephen King. I can’t comment on how it’s been adapted from the novel as I haven’t read it myself, but if its anything like the screenplay, I wouldn’t read it if it was the last book on earth. This is a really poor effort writing wise for King as he swoops to an all-time low. It also shows that his new novels are worthy of big budget movies anymore. If Sam Jackson and John Cusack can’t be bothered to at least act with the material they’ve got, then you know you have a shit screenplay.

Classified as a Horror/Sci-Fi/Thriller, Cell fails to connect to anyone of these genres. There is more suspense in an animated Disney movie than there is in this supposed thriller. I would only put this film in a comedic genre. Even then, It’s disgracing the genre. I really didn’t connect whatsoever to this film, character or plot line. The dialogue is brief and meaningless, the action minimal and the acting is all round terrible. There is absolutely nothing good about this film. I wouldn’t recommend this to my worst enemy. 0 out of 5 stars.