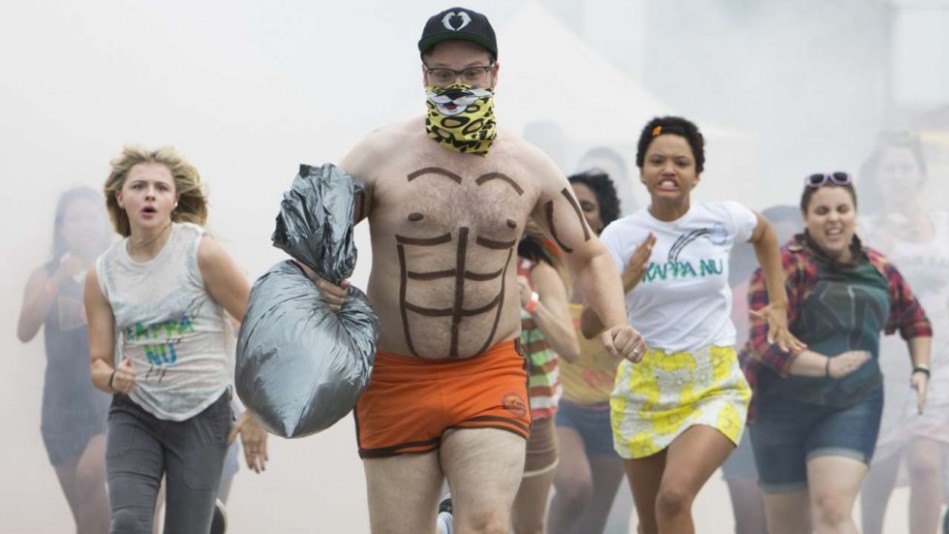 Following the huge success of Bad Neighbours a few years back, we have been given what could be labelled as a completely unnecessary sequel in Bad Neighbours 2. The events of the film consisted of a frat party moving in next door to young couple that recently had a baby. Problems ensued as they had loud parties and kept the neighbours up. Because of its popularity, Seth Rogen, Rose Byrne and Zac Efron all return as they team up this time to take down an out of control sorority group that have moved in next door. Does the plot sound a little familiar to you? It does to me.

The secret of success to a good sequel is to firstly, have a legitimate reason to revisit the characters again. That’s the first part where Bad Neighbours 2 fails. The characters all go their separate ways at the end of the first movie and to be honest, there is no reason at all why they should all bump into each other again. The second part to having a successful sequel is: DO NOT repeat the gags or laughs from the first movie. Now, one of the best things about the first film is that they had some pretty good moments that included airbags from a car. It was brilliant and effective in the first movie, and to use them again as a bit gag in the second film raises alarm bells of lacking of originality.

Don’t get me wrong, this is by far and away a complete mess of a film. To be honest, it’s actually not as bad as some comedy sequels that have come out in the last few years. Bad Neighbours 2 isn’t terrible but it does suffer from a very similar plot from the first one. We have seen all the jokes before and there’s nothing really that shocks or makes you laugh out loud in the sequel. It’s a shame because I really do enjoy watching Seth Rogen films, but I feel like the majority of his films aren’t ‘sequel worthy’. They are great characters that he has played and are extremely enjoyable, but just for one outing. Maybe this has been a mistake to make a sequel to Bad Neighbours.

One of the other problems for me is Chloe Grace Moretz. Personally, I think she has completely sold out in the past couple of years. After gracing the screen as Hit-Girl in Kick-Ass and starring in the remake Let Me In, Moretz had huge potential as an upcoming young actress that could actually act! Her fall from grace has descended even quicker this year after the disastrous 5th Wave and now the unsuccessful comedy sequel Bad Neighbours 2. It’s crazy to say it, but the best thing about Bad Neighbours 2 is the recurring co-star Ike Barinholtz who plays Seth Rogen’s best friend. A bit part co-star that steals the show in the first film somehow has the best parts in the sequel, too.

It’s a huge shame, because I quite enjoyed the first movie. It’s a film that’s easy to flick on anytime and have a laugh with either yourself or your friends. But when an unwanted sequel pops round and becomes almost forgettable from the second the end credits start rolling, then you know it’s never worth revisiting again. 2 out of 5 stars.