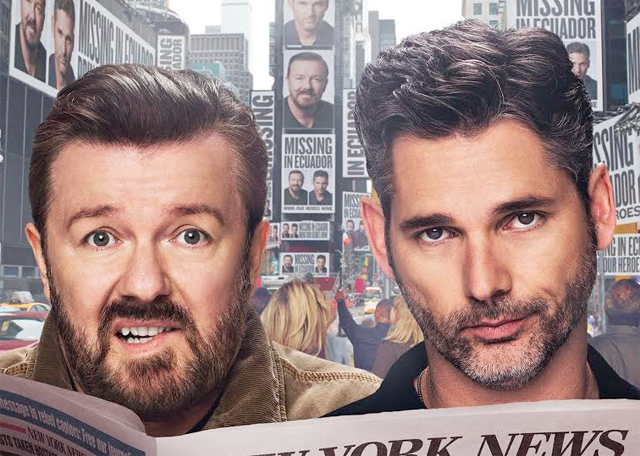 Jumping on the Netflix bandwagon, Ricky Gervais returns to our screen in this lacklustre comedy that tries too hard to blend comedy, romance and drama. Although its boosted by a rather impressive cast, it never truly manages to find its footing and ends up falling at the first hurdle.

‘Special correspondents’ follows a failing radio journalist (Eric Bana) and his unsuccessful technician (Ricky Gervais) as they attempt to report on a growing crisis in South America.

From a screenplay stand point, it’s nothing more than disappointing. Bouncing between genres, the simple plot is consistently fighting against its tone, causing the audience to miss the punch lines and overlook the human elements. Gervais has more than proven that he can write honest relationships between normal people, so why he tries so hard to condemn his strengths to minor sub plots is frustrating.

These issues with genre splicing are then further felt within the structure of the film. As the tone is never truly defined, we constantly find ourselves being pulled from one direction to another, effecting the pacing of the film dramatically. This mash up feels confused and therefore never really gets you completely engulfed in what’s going on.

Whether or not you are a fan of the writer/director, one thing is for sure – he can get together a fairly decent cast. Eric Bana is relaxed in the main role, but again, without any real depth, he never really hits a stride. More surprisingly however, is the apparent miscasting for the female lead. With a role more suited to Kristen Wigg or even Tina Fey, Vera Farmiga never really feels like she fits in.  Its a shame considering the body of work these actors have on their resume.

Considering how successful British comedy has been in Hollywood recently, it’s a real shame that Gervais hasn’t managed to upgrade his comedy to the big screen. With a confused script and lacklustre performances, it comes as no surprise that this has been relegated to the Netflix sin bin. When you add this to the ever failing list of ‘Netflix exclusives’, its a wonder they even bother with features at all. 2 out of 5 stars.