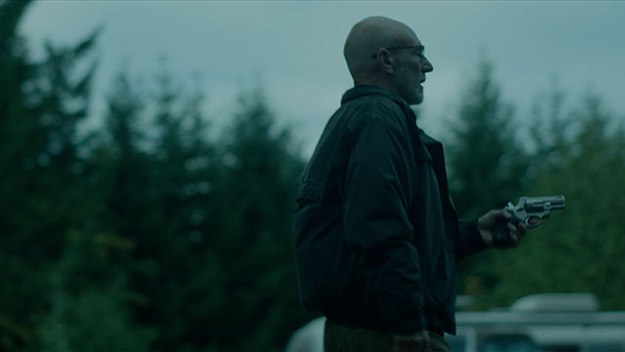 Hot from the critical success of Blue Ruin, director Jeremy Saulnier has mustered up another tense and entertaining thriller. Green Room follows a punk rock band that are travelling across America taking gigs just to get some money so they can continue touring. After being left short on their earnings at a venue, a local radio host helps set up another set for them to play at another location. Arriving for their next performance, they discover that they will be playing to a group of skinheads. Finishing their set, the band witness a murder and are forced into a fight for survival against a tortuous group of maniacs.

Leading the group of maniacal skinheads is veteran actor Patrick Stewart. The English acting legend is portrayed in a completely new light and does incredibly well to move away from the usual stuff that we have grown accustom to. We’re used to him playing a lot of Shakespeare roles and occasionally being one of the most powerful mutants in the Marvel universe. Portraying a crazed skinhead that swears a lot and encourages violence certainly isn’t what you would see on his resume. He does incredibly well in his role and is extremely believable throughout the film. Probably not used enough in the film to warrant an excellent performance from the actor, he can certainly say that he has turned heads. My reason for it not being an excellent performance is that there isn’t any stand out scene that I could remember that could label it to being incredible.

The story for the film is very basic; there’s not a whole lot going on apart from what you are seeing on screen. It’s not a head scratcher or an over thinker, it’s a sit back and relax while someone gets hit by a meat cleaver. Oh yeah, did I forget to mention, this is extremely graphic…and I loved it!

If you have seen the directors previous works in Blue Ruin, then you know exactly what you’re gonna expect. Green Room is delightfully violent in its efforts. A gory bloody mess, it’s a huge reinvention of old-school 70’s horror movies. The lighting, excessive violence and use of music is euphoric for classic thriller/horror movies of those times, and it’s great to see. Green Room has become one of my personal favourites of this year; it’s easily become a film that I would love to re-watch over and over again. Additionally, director Jeremy Saulnier is still one of my continued favourite indie directors out there.

Following on from a disappointing couple of months, we have an intriguing film that will shock, humour and entertain a lot of people. Great performances all round by the ensemble, including a not to be missed Patrick Stewart in a way that we haven’t seen before. A banging soundtrack, a lot of blood and violence and an interesting premise that doesn’t let up; Green Room is one of the better films to come out for months. 4 out of 5 stars.