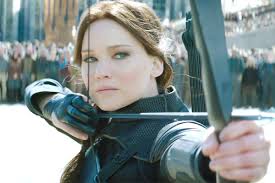 Mockingjay part 2 provides a suitable end to the saga that made Hunger Games a household name. But with some pacing issues, a succinct lack of depth and a serious anticlimax of an ending, it doesn’t quite reach the heights of the first instalment.

The final part of the Hunger Games saga sees Katniss on the final leg of her journey. Following directly on from part 1, we are immediately thrown into district 13, tracking the Mockingjays exploits as she continues her mission to take down President Snow.

Francis Lawrence once again takes the director’s chair to finish what he started when he took over Catching Fire back in 2013. The direction itself is ok but an overreliance on some of his past tricks doesn’t really bring anything new to the fore. Trying desperately to introduce something a little different, we end up with some nauseating camera angles that don’t do much other than induce motion sickness. Given that most of the beauty from the other Hunger Games instalments came from the games themselves, its a shame that more effort wasnt made to show the decadence of the capitol.

Even though it’s one of the weakest instalments, it’s still an enjoyable ride. As mentioned in the prologue, it’s still a suitable conclusion to the franchise, getting across the point nicely without dragging you through thick politics and propaganda. With the density of story, it does cause them to skip through each scene with vigour, never really leaving you too bored. This scene hopping though is the typical double edged sword that plagues book to movie adaptations and although it doesn’t mess around, it doesn’t allow any character development or depth to build appropriately.

This lack of depth is definitely one of the weakest elements of the film and is strictly routed within the problems with the pacing. Taking a look at part 1 and 2 combined, the biggest flaw is seemingly the mismanagement of content. With a distinct lack of any real story in part 1, part 2 only further extends the issue further by trying to cram too much in.  Choosing to fit in as much as possible, Mockingjay part 2 spends far too much time focusing on scenes and characters that have no real meaning. Rather than weave in any depth, these scenes are quite hollow and as such, leaves us with a film for the fans rather than one for the masses.

Jennifer Lawrence is her usual self, portraying Katniss in her typical way. Continuing a rather flat approach to the character, it’s quite nice when the young actress seems to put effort in towards the end. A personal favourite of mine throughout was Donald Sutherland, but with a strange change to the characters personality, the once mesmerizing ‘President Snow’ is portrayed in a much more jovial light and as such, becomes a lot more off-putting. With a fairly standard show from the rest of the cast, the performances are what you have come to expect from the franchise.

Overall Mockingjay part 2 does what it needs to – it finished off the franchise nicely. Although plagued with issues both clichéd in the light of book adaptation but also from a strange lack of direction it will inevitably provide an enjoyable final chapter. With an ever-ending anticlimax ending (reminiscent of ‘The Return of the King’) but with an interesting twist, we give it 3.5 out of 5 stars.