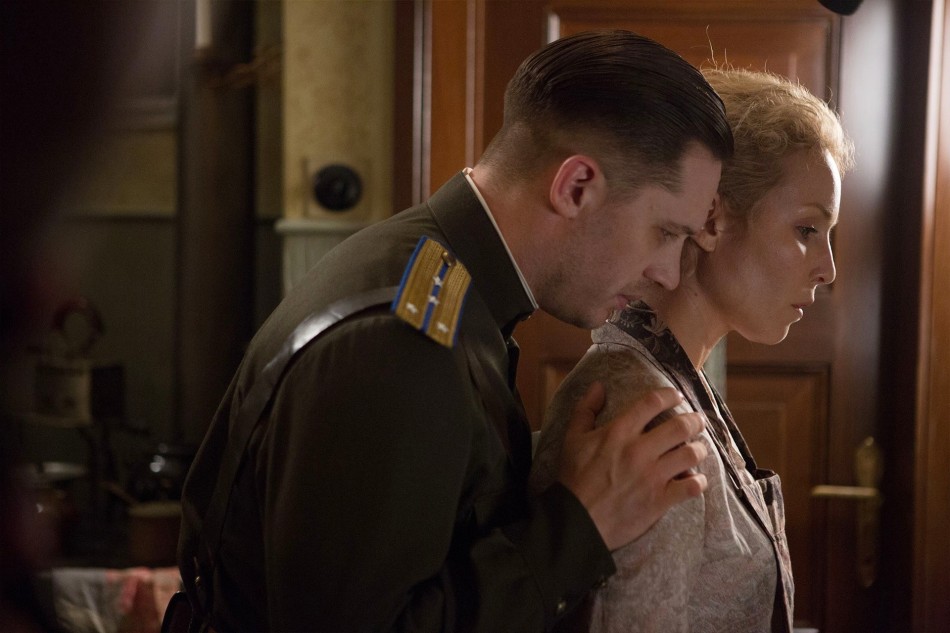 ‘Child 44’ is the new film by director Daniel Espinosa whose previous work includes ‘Safe House’ back in 2012 and the Swedish hit ‘Easy Money’ back in 2010. Starring Tom Hardy, Gary Oldman, Noomi Rapace, Vincent Cassell, Charles Dance, Paddy Considine and Joel Kinnaman; the film follows a disgraced MGB agent named Leo Demidov (Tom Hardy) who is put in charge of an investigation into a trail of brutal child murders. If I’m being completely honest, that is around about it. ‘Child 44’ sets up a great premise and which you would hope would follow a great film, which certainly looks promising if you are going by the cast of the film, but it never seems to get out of first gear.

Even though the plot of the film does grip you to watch the film, ‘Child 44’ is bogged now by numerous sub plots throughout the film which eventually brings down the interest and suspense of the film. From the get go, we are introduced to Tom Hardy’s character Leo who is declaring his love for his wife Raisa (Noomi Rapace) at a table full of other MGB agents and their wife’s, but not long after that, Leo Demidov is given the news that his wife is a potential spy and is to be taken away, but Leo Demidov agrees to go away with her which makes him a disgraced member of the MGB. Now if that isn’t enough of a plot for you already, let’s throw in another. Not only is Tom Hardy’s character thrown out of Moscow and the MGB, he is gifted the chance to join General Timur Nesterov’s (Gary Oldman) army and is informed that there are a series of brutal child murders going on.

The interesting but baffling thing about the whole film is how they continuously move from one plot to another. ‘Child 44’ has a personality disorder and cannot comprehend between the two major plots in the film. Are we going to concentrate on Tom Hardy’s characters betrayal to the MGB during the Soviet Union rule in Stalin’s time or is he going to tackle a series of child murders that is occasionally brushed under the mat throughout the film. Of course, they are going to try and ram them both in together, yay! Unfortunately, that is the huge problem of the film, way too much going on and not only that, once you get involved and interested in one of the plots, they twist and go to the other.

What’s most disappointing is the misuse of such a fantastic cast; Tom Hardy is good as he always is, but I don’t believe it’s his best performance, but most likely my least favourable performance from Tom Hardy is a little while which is massively disappointing, but keeping Gary Oldman away from the screen is another miss too. Having an actor of his calibre in the film and not using him enough is a crime in itself, and the director has missed out on a huge opportunity there. Albeit, ‘Child 44’ isn’t awful, it’s not even bad, it’s just very average and it’s a shame because while watching the film, you can identify the huge potential for the storyline and the characters, but it just never seems to be able to pull off and fly away with the plot.

The Soviet/Stalin Russian Child Murder Investigation with the persistent reminder of the betrayal to the MGB by Tom Hardy’s character, or abbreviated to ‘Child 44’ as it’s known, is a disappointment, but it’s close to being a good film, but unfortunately, it falls short. 2 out of 5 stars.