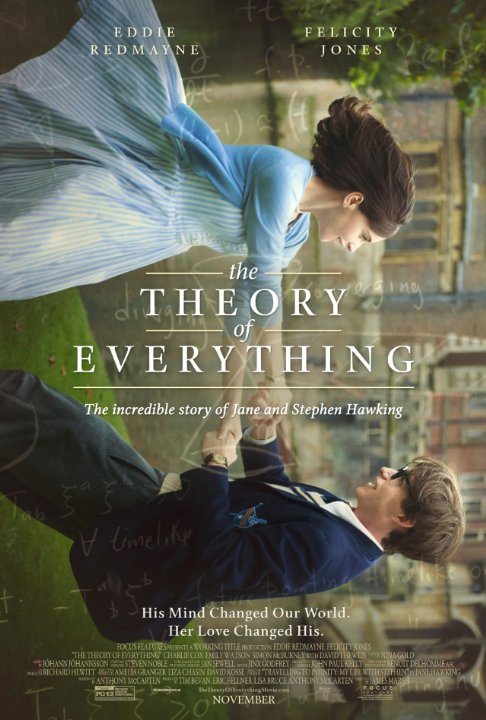 The Theory of Everything tells the gentle becoming’s of one of the greatest thinkers of our generation, but is it worth the watch? Lets find out….

The story centres around Stephen Hawking and his journey through Academia and his battle with Lou Gerhig’s disease (A form of Motor Neurone diseases).

The film as a whole is a great watch. Each scene lovingly crafted, unfolding each event rather than throwing it at you, but there were some elements that felt seemingly divided. On one hand we are shown Hawking in all his intellectual glory, convincing us of his unrelentless pursuit of knowledge and on the other, a gentle love story shot effortlessly behind clouded lenses! Although this style of directing does produce a clever ‘layered’ effect to story telling,  its indistinct tone does cause a few pacing issues and may leave you questioning where the film is going rather than sitting back and enjoying the journey!

One of the best elements of the film  is the scripts retention of Hawkings humour! Well known for his dry wit and hilarious outlook on life, we are treated to some truly funny moments. Confidently not shying away from the illness, the story told is that between man and woman rather than man succumbing to illness! Its for this alone where credit is due, as some biopics play on mans strife with circumstance rather than what he did in spite of it!

Eddie Redmayne is incredible. To play someone who is both alive and disabled could have gone so wrong, but his performance manages to capture greatness rather than take the piss – worthy of the Oscar win this Sunday (and given his recent character choices – Jupiter ascending – probably his only one). Felicity Jones gives a very noteworthy performance, taking control of some very moving scenes and really showing the audience what she can do when the cameras are turned on. She has definitely come a long way since Chalet girl and the Worst Witch!

The story does exactly what it needs to – It captures the beauty of genius marred by tragic circumstance.  The theory of everything is a great story that will leave you with goosebumps! With some performances that have both been nominated at this years Oscars, its important that you don’t miss this one! 4 out of 5

0 comments on “The Theory of Everything Review”