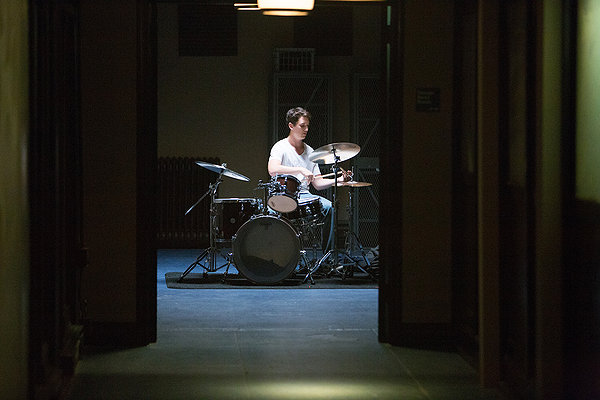 “There are no two words in the English language more harmful than good job”. That quote is one of the most recognizable quotes in the music/drama film Whiplash starring Miles Teller as Andrew Neiman, a 19 year old aspiring Jazz drummer who gets accepted into the best music school in America. Once there, we encounter this mysterious teacher figure Terence Fletcher (JK Simmons) who is the conductor of the jazz band who is looking for a drummer.  The film opens up to a pulsating opening scene where we see Andrew Neiman playing on the drums in a passionate manner, to which shortly through his performance, we are introduced to the angry/charismatic Terence Fletcher. The tension of the first opening 5 minutes of the film has already set the tone for the rest of the film, and your mind becomes intrigued to how the events of the film are going to pan out.

The pure energy that is conveyed through our two leading actors is electrifying; Miles Teller smashing down the drums in an aggressive but beautiful manner made my jaw drop to the ground. Opposite him, we have JK Simmons creating a new kind of power, through the aggression of his voice. Throwing curse words and insults around like it’s a free hug; JK Simmons captures the performance of Terence Fletcher and makes him real. Both Teller and Simmons are absolutely terrific together and it’s a delight to see two actors work together so well. Oscar Nominations should be on its way for this film, as it has become my favourite film of the year. JK Simmons performance is his career best, and I believe one of the best supporting performances in the last decade.  His portrayal of Terence Fletcher reminds me of the performance by R. Lee Emery in Full Metal Jacket as Sergeant Hartman; the power and aggression is spell-binding and NEVER EVER over the top.

Only his second feature film, Damien Chazelle has delivered what looks like his masterpiece already at the age of 29. Remember that name, as I expect to see more good work in the future by this director. Whiplash is an outstanding film and has already flown into my heart and has become a big favourite of mine already; the direction of the film is absolutely beautiful and sublime; the performances speak for themselves, in which I hope especially for Miles Teller, it becomes a springboard for the young actor to continue to do good serious work, instead of working on films like Divergent (Sorry guys!).

I was very fortunate to see the film on an event screening for Odeon’s Screen Unseen which shows a film which isn’t due for release for a while, and when I saw that Whiplash was being shown, my face was full of delight. I urge everyone when January 16th pops around to see this film. Electrifying, stylish, beautiful and physically draining, Whiplash jumps right out of the screen and makes you feel the sweat and blood in the film and for me, and film like that is absolutely faultless; 5 out of 5 stars.